Written by admin, in Ergonomic-Handles

Plastics have proved to be a boon to inventors! Just think of all the widgets and gadgets that inventors have made using plastics. One of those entrepreneurial inventors, Tim Crawley, developed Snappy Grip handles. Why this invention? Well you know what they say about necessity being the mother, etc.

“We chose to design Snappy Grip Handles because there needed to be a better way to lift heavy buckets of material,” says Crawley, who licenses the Snappy Grip Handles through his company, Snappy Grip Inc. “The buckets that we would carry could weigh between 60 and 100 lbs, and the cheap little handles that have been the industry standard for more than 40 years caused much hand and forearm strain, especially when carrying the load for any distance.”

It took three years and several office actions before Crawley was issued his first patent for Snappy Grip, and another 2.5 years and several office actions before he received the second patent. Most inventors get patents, although there’s some controversy over the real value in getting patent. Are you just showing others how to make your product? And a patent is only as good as the product owner’s ability (financial mostly) to protect it.

“The patents were much easier to get than the mold, but more costly and stressful. We still have one patent pending. God only knows how long it will take to get that one issued,” he says, a tinge of exasperation in his voice. “We also have a Registered Trademark for them.”

It took Crawley about 18 months from concept to completion through Snappy Grip’s subsidiary, Wonder Works Unlimited, Crawley’s design, development, and fabrication company. “We did several prototypes to come up with the most comfortable size and shape of handle,” he explains. “I designed the way the handle would be molded so that we could keep the mold cost low. The mold has no moving parts, and all of the undercuts and tabs were formed in two solid slabs of steel.”

While dealing with the plastics industry to get a mold and molded parts can be a frustrating experience for many inventors, Crawley had some knowledge of the industry prior to starting Snappy Grip’s design. “If I had not had the knowledge, I would have been lost and had to assume that the engineering company knew what they were doing. Luckily, the engineering company knew the things that I didn’t so we worked pretty well together.” 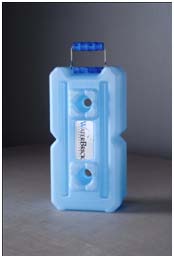 One fly in the ointment was Crawley’s choice of an engineering company that took the mold build to China, and wouldn’t even tell Crawley the name of the mold maker. “The engineering company, I later found out, was raking me over the coals,” he says. “Ultimately we had the mold sent to Guttenberg Industries Inc., to manufacture the handles for Waterbrick International Inc., as well as for ourselves. However, we just signed a contract with Delamo Manufacturing to be our licensee and West Coast molder.”

Crawley is currently having a new mold built at Delamo that will result in being able to make the Snappy Grip handles in greater quantities, at a lower cost and with shorter cycle times. The handles are molded in HDPE with talc added for strength or in polypropylene, per the request of one customer.

The most difficult part of the whole process for Crawley was just selling the idea of a new type of handle, which required push marketing. “Getting people to understand that what has always been wasn’t necessarily the best way, and seeing that Snappy Grip was superior,” he says. 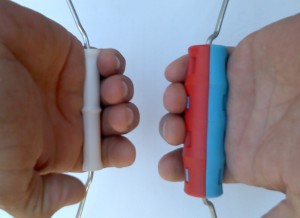 Crawley notes that he met with quite a bit of resistance from the ergonomic world because of the handle’s diameter. “They said it was too small, but eventually we proved that the ergonomic standard was not the same when grasping and lifting,” Crawley says. “Our handles have been rigorously tested by the mining and prospecting industry where buckets can weigh up to 100lbs, and have had no complaints. Though we only guarantee that our handles will not fail at 80 lbs, some of our customers tend to push them even further and have given us great feedback.” 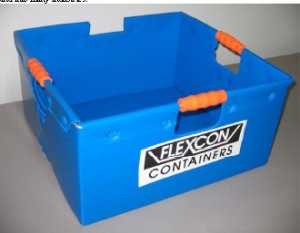 “When it comes to comfort and safety, there’s no other handle that even comes close to Snappy Grip,” he says proudly.

Crawley admits that developing the Snappy Grip handles, getting them patented, manufactured and then into the market has been “a long road to hoe,” not to mention the tens of thousands of dollars he’s spent. “But all in all we have had a lot of fun, met a lot of great people and have learned more than we ever thought possible.”

Being an inventor isn’t the easiest job, and Crawley, who is currently President of the Inventors Association of Arizona (IAA), says that, “I would have never even attempted to do this it if not for the things that I learned from the IAA. I will be a member and mentor in the organization for the rest of my life.”